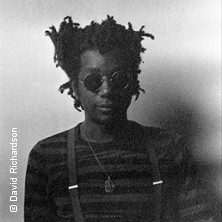 Time, death, life, living, hope: these are the big themes from which L.A. Salami has crafted his astonishing second album. Lookman Adekunle Salami is a man in his mid-twenties with a restless spirit and boundless creativity. He makes charming indie-folk, songs that turn intimate tales into epic anthems and big issues into campfire laments. His 2016 debut album Dancing With Bad Grammar introduced a daring new artist and, coming less than two years later, The City Of Bootmakers is a bold step forward. It’s a record impossibly of its time. It is L.A. Salami’s state of the nation address.

“The current generation seem a bit lost, but it’s still a positive record,” says Salami. The album is the realisation of concepts that have been brewing in Salami’s melting pot mind for a few years. It was originally intended to be a double album, with one side titled The Bootmakers and the other Back To The City. Eventually, the two tales were morphed together, their themes top and tailing. “The Bootmakers’ side of things is supposed to be more band-orientated, and Back To The City is more the sound of laying in a gutter at a carnival in the mud looking up at the stars,” says Salami. The bootmakers reference comes from the adage “bootmakers be kings,” which Salami has always seen to mean that, despite anyone’s power, they’re nothing without their boots, meaning the people round them, their city or inspiration. The city side of things, meanwhile, represents a mythological place that harbours what the world is going through.

Salami has been writing songs since his early teens, way before he could play an instrument, and this feels like a culmination of his songwriting craft. As a child, his time was split between London and Broadstairs in Kent, an upbringing that’s reflected in The City Of Bootmakers two-pronged approach, an album that manages to sound like it’s being hollered out of the abyss one minute, and looking reflectively at it from afar the next.

The record begins with the ramshackle sway of Sunrise (intro), which contains a reference to a previously released track The Scene, here delivered amidst the clatter in poetry form. “It’s representative of that carnival sound,” says Salami. The West Coast-style jangle of Generation L(ost) sets the narrative tone for the album. “This generation feels like we’re looking for where it went,” says Salami. “There’s political problems, social problems and inter-personal problems.” From here, the album follows a seamless thread, mapped out by a curious mind who kept writing songs that effortlessly fitted in to his masterplan. The gentle groove of Who’s Cursing Us Now continues the theme, whilst Terrorism! (The Isis Crisis) makes an absurdly catchy chorus out of its title. “It’s one of the major issues today and on everyone’s mind, so I wrote a song about it,” Salami says.

Originally, Salami intended the track to be a Sleaford Mods-style rant but added a playful edge by delivering its satirical message in the form of bouncy indie-rock. “The song is saying, ‘look, they’re using a book that is the basis of a religion, it’s just crazy people who don’t give a shit about other people using it as an excuse to do terrible things.’” The bar-room blues folk of Brick Lane was meant by Salami as “an obvious pisstake.” “There’s a problem with gentrification but at the same time the beginning of gentrification is generally good, as it’s the people who can’t afford the best of things, who tend be artists. Then they make the area attractive and it heightens the value… it’s a dragon eating its own tail.” Salami sings the song from the perspective of what he describes as a “less than self-aware hipster.”

It’s a record of questions and answers: the expansive acoustic-rock of I’ll Tell You Why dovetails with the sparse England Is Unwell (“my little musical number”), whilst the Van Morrison-style thump of A Man, A Man Without Warning signals the record’s “more cerebral” section. “It’s dealing with existential problems, time and death and what you’re supposed to do in the world,” says Salami. These are songs celebrating our biggest fears, looking them in the eye and tackling them head-on.

The melancholic, plaintive The Talisman On The Age Of Glass wraps up these universal ideas into a dark, personal ballad. The talisman represents the voice Salami hears in his head, offering words of wisdom, “the guy on my shoulder.” The age of glass, meanwhile, is the time in which we live, when things are shattering and we’re cutting ourselves on it. The album ends on the hopeful, melodious What Is This, a record about finding meaning in the worst of times emerging quietly triumphant. Every time L.A. Salami thinks he’s found an answer to any of the questions swirling around his head, he writes a song about it. That’s how he finds a way forward. The City Of Bootmakers is a peek inside the mind of a fascinating artist just getting started.